“Pride goes before destruction, a haughty spirit before a fall.” (Proverbs 16:18)

“When pride comes, then comes disgrace, but with humility comes wisdom.” (Proverbs 11:2)

“A man’s pride brings him low, but the humble in spirit will retain honor.” (Proverbs 29:23)

“Before his downfall, a man’s heart is proud, but humility comes before honor.” (Proverbs 18:12) 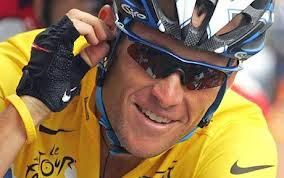 By now you’ve heard the story: Lance Armstrong, one of Americas greatest athletes of all time, did use performance-enhancing drugs throughout the majority of his cycling career and to win all seven Tour de France races. He went through great lengths to obtain and take those drugs and hide the fact he took them. And he threatened, bullied, and attacked anyone who accused him of doping. He lied, cheated, and sued people and organizations to keep his illegal activities secret. But as we all know, his dirty dealings caught up with him. He was stripped of all seven of his Tour de France titles. All of his sponsors cut him loose, and Livestrong, the foundation he created to support and inspire cancer victims and survivors urged him to step down as chairman, which was the hardest blow of them all.

When I first heard the news, I wasn’t overwhelmingly surprised, but I was curious to learn the details about the federal investigation into his doping activities and the investigation launched by the US Anti-doping Association, which strategically backed him into a corner and gave him no choice but to come clean and tell the truth. I was a fan of Lance Armstrong. I didn’t watch the Tour de France races or follow his career closely, but I always rooted for him from the sidelines. Like millions of people, I believed him when he said he didn’t use performance-enhancing drugs, and I had wished everyone would just stop accusing him.

I watched his interview with Oprah Winfrey. I saw a man whose hardened, calloused heart was finally beginning to soften, an extremely prideful heart starting to show signs of humility. He admitted his wrongdoing and realized how much heartache and pain he caused so many people, including his children and mother. He almost broke down and cried when he talked about having to break the news to his children and how much of a negative impact the news had on his mother.

I felt somewhat sorry for him, but as I watched the interview and learned about all he had done with such malice and evil intent, I thought about what the Word of God says about pride, sin, sowing and reaping, and what happens when your life is built on sand and not on the Rock.

Lance’s life fell with a great crash. His pride led to his destruction, his fall, his disgrace, and it has brought him very low. But God is merciful. God gives grace to the humble; with humility comes wisdom and honor; God dwells with the humble; and He revives the heart and the spirit of the lowly.

Hopes of Meeting the Savior

My prayer for Lance is that he would learn a life-changing lesson from this experience, and learn that there is a God who loves him and is willing to forgive him if he takes the ultimate step of humility: giving his life to Christ. Only then will he be restored and given new life with true meaning and purpose.

Judy Riddle is a Christian devotional and feature writer, editor, author, and photographer. She has a devotional writing and photography web site at http://virtuouswomanministry.blogspot.com and http://judysphotogallery.blogspot.com. She writes devotions for christiandevotions.us and has been published in For Better, For Worse: Devotional Thoughts for Married Couples and Anointed Magazine. She enjoys leading bible studies, photography, crockpot cooking, exercising, swimming, and socializing with friends. She lives in the northeast with her husband and son.